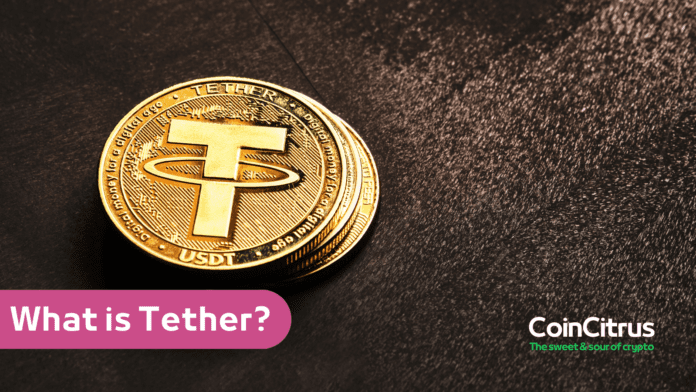 What Is Tether (USDT)?

Tether was designed to enable the transfer of money between exchanges, wallets and other financial applications. With Tether, users can move money quickly and without expensive conversion fees. It also allows traders to store their funds in a stable token when the market is volatile or highly unstable.

Tether was launched in 2014 by Brock Pierce, Reeve Collins, and Craig Sellars. It is the most popular stable coin in terms of market capitalization, with nearly $50 billion USDT tokens in circulation as of April 2021.

Thanks to its “peg” to the US Dollar, traders can also use Tether as a safe haven when traditional markets are volatile or unstable. This has been particularly useful during economic downturns, such as the 2020-2021 pandemic.

Tether also provides an opportunity for investors to hold their assets outside of traditional banks or financial institutions. This allows its users to avoid onerous regulations and KYC (know your customer) requirements that come with other cryptocurrencies.

How Does Tether Work?

Tether is a blockchain-based cryptocurrency that seeks to enable the transfer of value across different blockchains. It works by creating tokens on one blockchain (the “host” chain) which are pegged to another asset. In the case of Tether, those assets are usually major fiat currencies like the US Dollar, Euro, or Japanese Yen.

Tether uses the Omni Layer protocol, which is built on top of the Bitcoin blockchain. This allows users to securely and quickly send tokens from one blockchain network to another without worrying about conversion rates or fees. When a user sends Tether tokens from one chain to another, it is converted into an equivalent amount of the corresponding fiat currency.

Tether also allows users to securely store their tokens on its platform. The company offers several wallets and exchanges that integrate with the Tether protocol, allowing users to easily send, receive and store their tokens safely. Users can also use these features to buy and sell other digital assets as well, making it an attractive option for those looking to diversify their crypto portfolios.

The History Of Tether

Tether is a cryptocurrency that was launched in 2014 by the Tether Limited team. It is modeled after the Bitcoin protocol but instead of being backed by blockchain technology, it is backed by actual fiat currency reserves. This means that each unit of Tether can be exchanged for one US dollar. The concept behind Tether allows users to trade using the cryptocurrency without the volatility associated with cryptocurrencies such as Bitcoin.

Tether Limited is owned by a conglomerate of companies, including Bitfinex and Tether Holdings Ltd. The purpose of Tether was to allow users to trade in more traditional currency pairs, such as USD/EUR or USD/YEN, using a cryptocurrency platform that is more efficient than traditional trading. This would enable users to buy and sell assets without the risk associated with cryptocurrency trading.

The early version of Tether used the Omni Layer Protocol, a protocol developed by the Bitcoin Foundation to enable tokens on top of Bitcoin’s blockchain. It allowed for the creation of new tokens and enabled transfers between different wallets. In 2017, the team behind Tether switched to a different protocol called the Ethereum-based ERC20 protocol. This allowed for more efficient transactions and enabled users to use more advanced features such as smart contracts and decentralized exchanges.

Is Tether (USDT) A Good Investment?

Tether (USDT) is a cryptocurrency that is backed by the US dollar, making it one of the most stable digital assets available. It’s used as a bridge between traditional fiat currencies and crypto-assets like Bitcoin or Ethereum. While Tether may be attractive to those who want access to the highly volatile world of cryptocurrencies without taking on the risk of buying a volatile asset, it may not be the best investment for everyone.

Tether’s main advantages include its stability and liquidity, making it an attractive option for investors who want to maintain their capital without taking on too much risk. The fact that Tether is backed by a fiat currency also gives users peace of mind when exchanging currencies.

However, there are some drawbacks to investing in Tether as well. Despite being backed by a fiat currency, it is still subject to the same volatility seen in other cryptocurrencies. Furthermore, Tether’s value may not match up with that of the underlying asset if you choose to hold the token long-term.

To stay up to date with the current USDT price data, click here.

Should You Buy Tether (USDT)?

Despite its popularity, Tether (USDT) is not without controversy. The lack of transparency and regulatory oversight have led to questions about the stability and reliability of USDT as a form of digital currency. Additionally, concerns have been raised about potential manipulation of the market due to the fact that Tether has sole control over its own supply.

Ultimately, whether or not you should buy Tether (USDT) comes down to personal preference. For those who are comfortable with its lack of transparency and potential manipulation, it may be a good choice. However, for those looking for more secure investments in digital currencies, other options such as Bitcoin or Ethereum may be more suitable.

How Many Tether (USDT) Coins Are There in Circulation?

There are 4.9 billion Tether (USDT) coins in circulation, with a market capitalization of over $4 billion. The supply of USDT is determined by the demand for it and its use as a stablecoin pegged to the US dollar. As more people buy and sell Tether, its supply increases or decreases as needed to maintain its value. As of this writing, Tether is the third largest cryptocurrency by market capitalization and continues to be a popular choice among traders seeking liquidity and stability.

Tether is also an attractive asset for investors who are wary of the volatility of other digital currencies but still want exposure to the crypto markets. USDT is accepted by many major cryptocurrency exchanges, so traders can easily move their funds between different digital assets. Tether also has applications in the DeFi space, where it is often used as a reliable source of collateral for smart contracts and other financial products.

Where Can You Buy Tether (USDT)?

Tether (USDT) can be purchased on a variety of cryptocurrency exchanges. Depending on your region and preferred payment method, some exchanges may offer better options than others. Popular exchanges that allow you to buy Tether include Binance, Kraken, Bitfinex, and Huobi Global.

When making a purchase on an exchange, it’s important to research the fees associated with each method of payment, as well as the security measures in place to protect your funds. Additionally, many exchanges offer staking rewards and other incentives that can make investing in Tether more profitable.

Some exchanges also support USDT-based derivatives such as futures or options. This allows investors to take advantage of price fluctuations and gain exposure to more advanced trading strategies.

It’s also possible to purchase Tether directly from the official website, tether.to. The process is simple and straightforward—all you need to do is enter your payment details, select USDT as the currency of choice, and confirm your order.

Tether (USDT) is a cryptocurrency that is pegged to the US dollar, offering users an easy way to move money between different exchanges, wallets, and currencies. It has become one of the most widely used cryptocurrencies in the world due to its flexibility and convenience. Despite some controversy surrounding its operations, Tether has been extremely successful in providing users with a secure and convenient way to move money quickly and easily. As the cryptocurrency industry continues to grow, Tether is likely to remain a key player in the market. It will continue to be an important tool for traders seeking quick and easy access to different currencies and exchanges.