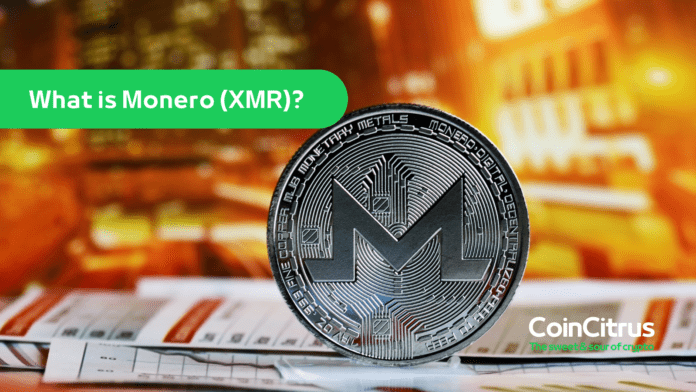 Monero has become one of the world’s leading cryptocurrencies due to its focus on transaction security.

What Is Monero (XMR)?

Monero (XMR) is a decentralized, open-source cryptocurrency that focuses on privacy, decentralization, and scalability, and it uses a proof-of-work algorithm to validate transactions on its blockchain. It was designed to be private and untraceable, using techniques such as ring signatures and stealth addresses to conceal the identities of the sender and recipient of transactions.

Monero uses a proof-of-work algorithm called “CryptoNight” to validate transactions on its blockchain, and it has a fixed total supply of around 18.2 million coins.

It currently has a large and active community of developers and users, and it has undergone several updates and improvements to its underlying technology over the years.

How Does Monero Work?

Monero uses a public ledger to record transactions, just like other cryptocurrencies. However, Monero uses a technique called “ring signatures” to hide the identities of the sender and recipient of each transaction. This makes it difficult for anyone to trace a specific Monero transaction back to a particular individual or group.

In addition to its focus on privacy, Monero also uses a technology called “stealth addresses” to further protect the privacy of its users. A stealth address is a one-time use address that is generated for each transaction, making it even more difficult to track the movement of Monero on the blockchain.

The History Of Monero

Monero was created in April 2014 by a developer (or group of developers) using the pseudonym “Nicolas van Saberhagen.”

Since its launch, Monero has become one of the most popular and widely used privacy-focused cryptocurrencies. It has also attracted a large and dedicated community of developers and users, and it has undergone several updates and improvements to its underlying technology.

Is Monero (XMR) A Good Investment?

Like any investment, buying Monero (XMR) carries some inherent risks. The value of Monero (and all cryptocurrencies) can be highly volatile, and it is not uncommon for the value of a cryptocurrency to fluctuate significantly in a short period of time.

Here are a few factors to consider when evaluating the potential of Monero (XMR) as an investment:

To stay up to date with the current XMR price data, click here.

Should You Buy Monero (XMR)?

Ultimately, the decision to buy Monero (XMR) or any other cryptocurrency should be based on your own research and evaluation of the risks and potential rewards. Before making any investment, it is important to thoroughly understand the technology behind the cryptocurrency, as well as the potential risks and rewards of investing in it.

It is also a good idea to consult with a financial advisor or professional before making any investment decisions.

How Many Monero (XMR) Coins Are There in Circulation?

As of December 2022, there are approximately 18.2 million Monero (XMR) coins in circulation. Monero has a fixed total supply of exactly 18.2 million coins.

Where Can You Buy Monero (XMR)?

Monero (XMR) is a decentralized, open-source cryptocurrency that focuses on privacy, decentralization, and scalability. It has a strong track record of adoption and use among those who value privacy, and it has consistently ranked among the top 30 cryptocurrencies by market capitalization. While investing in Monero (XMR) carries some inherent risks, it may be considered a good investment opportunity by some investors.