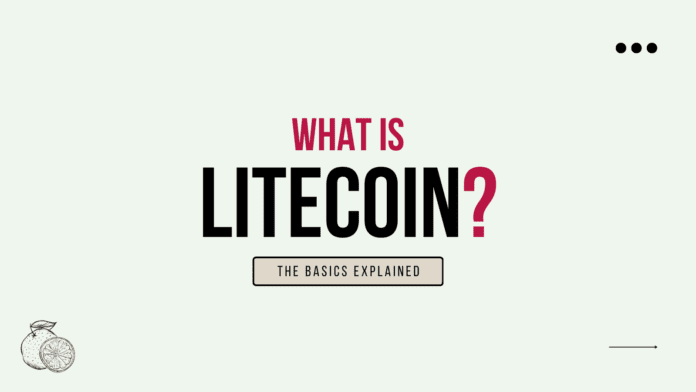 Litecoin is one of the oldest cryptocurrencies out there.

What Is Litecoin (LTC)?

Litecoin is an open-source, peer-to-peer and decentralized digital currency, launched in 2011 by former Google engineer Charlie Lee. It’s a Bitcoin spinoff but with a few key differences. Litecoin aims to be faster, more efficient, and more secure than other cryptocurrencies. Transactions are confirmed faster through its use of the Scrypt algorithm, and it has a larger coin supply at 84 million units compared to 21 million for Bitcoin. In addition, Litecoin features improved storage efficiency and lower transaction fees than other digital currencies.

LTC is one of the top cryptocurrencies in terms of market capitalization, with a current value of over $3 billion. This makes it an attractive investment option for those looking to enter the crypto market. It has seen a huge spike in price since its launch, and is now one of the most popular digital currencies around. As with other cryptocurrencies, LTC can be used as an investment or to purchase goods or services online.

Litecoin has been widely adopted by merchants, exchanges, and wallets around the world. It has even been accepted by major retailers such as Overstock, Expedia, and Newegg. This increased adoption of Litecoin has made it one of the most popular digital currencies.

How Does Litecoin Work?

Litecoin is based on the same open-source code as Bitcoin, the world’s first cryptocurrency. It uses a peer-to-peer (P2P) network of computers that work together to process and verify payments.

Transactions are secured by cryptography and stored on the network, so they are secure from outside interference and manipulation. To process payments quickly and efficiently, Litecoin uses what’s called a Proof-of-Work (PoW) algorithm. This type of consensus system requires miners to use their computing power to solve complex mathematical puzzles, and when they succeed, new blocks are added to the blockchain and rewards are distributed.

The PoW algorithm is designed to reduce the possibility of fraud or double-spending – something that can occur with digital currencies like Bitcoin. It also helps to keep the network secure and prevents malicious actors from taking control of it.

The Litecoin network is faster than Bitcoin’s, which makes it more suitable for day-to-day transactions. Transactions are confirmed in as little as 2.5 minutes compared to 10 minutes with Bitcoin.

The History Of Litecoin

The development of Litecoin began in October 2011, when software developer Charles Lee created the protocol based on Bitcoin. He has described it as a “silver” to Bitcoin’s “gold.” While there are some similarities between the two cryptocurrencies, such as their decentralized nature and open source codebase, Litecoin has some distinct differences.

For starters, Litecoin has a much faster transaction time than Bitcoin. This is due to its use of the Scrypt algorithm, which is more efficient for smaller transactions. In addition, Litecoin features a larger number of coins (84 million versus Bitcoin’s 21 million) and higher mining rewards.

The popularity of Litecoin has grown significantly in the past few years. Its value has risen from around $3 to over $200 at its peak in late 2017. This was due to a combination of increased adoption and global economic turbulence which saw investors seeking alternative forms of currency as an alternative store of value.

Is Litecoin (LTC) A Good Investment?

Due to its solid fundamentals and development potential, Litecoin is regarded as a promising investment by many investors. The cryptocurrency is one of the most well-liked ones available, with a sizable community and broad exchange acceptance. Due to its high liquidity, it is also reasonably simple to buy and sell, enabling speedy transactions when necessary. Additionally, both consumers and businesses find it appealing because of its minimal transaction fees.

Litecoin does, however, come with risks, just like any investment. Investors should be warned that prices may move abruptly and considerably because cryptocurrency markets can be quite volatile. Additionally, because of how young and unproven the technology underlying cryptocurrencies is, they are more susceptible to security threats like hackers.

To stay up to date with the current LTC price data, click here.

Should You Buy Litecoin (LTC)?

Like any other type of investment, cryptocurrencies have their associated risks and rewards. If you are considering investing in Litecoin (LTC), it’s important to do your research and understand the technology behind it before you invest.

But overall, Litecoin is a solid project operating for many years and a dedicated team behind it. Only time will tell if we will see an all time high again.

How Many Litecoin (LTC) Coins Are There in Circulation?

The total supply of LTC will eventually reach 84 million, which is roughly four times the amount of Bitcoin that exists today. Of this supply, about 64 million have already been mined and are in circulation right now. The remaining coins will be mined over the next several years, until the total supply is reached. Litecoin’s block reward halving schedule is every 840,000 blocks (approximately every four years) which will decrease the amount of new LTC entering circulation each year. As a result, the total supply of LTC should remain fairly stable over time.

Where Can You Buy Litecoin (LTC)?

Numerous places offer Litecoin (LTC) for sale. LTC may be purchased most frequently on cryptocurrency exchanges, with Coinbase and Binance being the two most well-liked choices.

Similar to a bank account, a digital wallet enables users to keep their cryptocurrencies safely and securely in one location. Exodus, Jaxx, and Atomic Wallet are three common Litecoin (LTC) wallets.

LTC purchase is a reasonably simple process once you’ve selected an exchange and made a wallet. Simply add money to your account, then from the exchange’s selection of cryptocurrencies, choose “Litecoin (LTC)”. Your Litecoin (LTC) will be transferred to your wallet for storage after your purchase has been completed.

Additionally, you can buy Litecoin (LTC) with fiat money like US dollars or euros. This option, which is now widely available on exchanges, enables users to purchase LTC without first needing to acquire any other cryptocurrencies.

Last but not least, some buyers opt to purchase Litecoin (LTC) through peer-to-peer marketplaces like LocalBitcoins or Bisq. These marketplaces effectively pair buyers and vendors, enabling direct communication between them. Before choosing a platform, it’s vital to examine the benefits and drawbacks of each exchange because, while they may provide greater anonymity than conventional exchanges, they also carry some added hazards.

Litecoin (LTC) is a powerful and innovative cryptocurrency that offers unique advantages over many others. Its low transaction fees, fast transactions times, and secure network make it an attractive option for people looking to use digital currency. In addition, Litecoin’s PoW consensus mechanism ensures that miners are incentivized to verify transactions and secure the network, making it more reliable than other cryptocurrencies. As Litecoin continues to grow and further refine its technology, we are confident that it will continue to be a popular choice for digital currency users around the world.

Litecoin is an open source project with a supportive community of developers and enthusiasts who are committed to advancing the future of digital currency. With its strong development team, robust infrastructure and loyal user base, Litecoin is poised to become one of the most popular cryptocurrencies in the world. If you are looking for an efficient and reliable way to send or receive money online, then Litecoin is definitely worth considering.