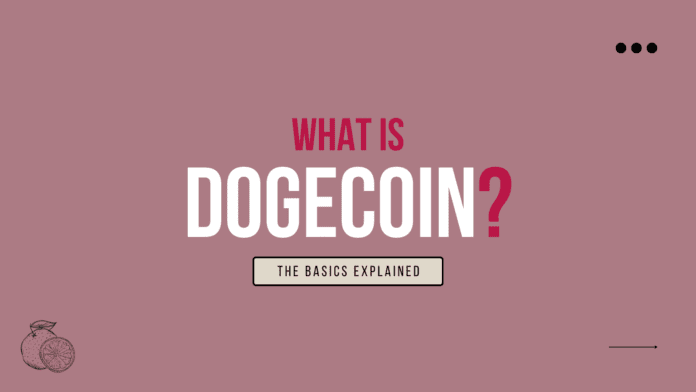 What Is Dogecoin (DOGE)?

Dogecoin (DOGE) is a decentralized digital currency and payment system based on the popular “doge” Internet meme. It was created in 2013 as a joke, but has since become one of the most widely used cryptocurrencies. Dogecoin is based on Litecoin, but uses its own blockchain network and features faster transaction times than Litecoin. Dogecoin is used for peer-to-peer transactions, and its primary purpose is as a cryptocurrency that enables users to transfer money quickly and securely. It also has many other uses, including tipping people online, trading goods and services, and even participating in charitable activities. Dogecoin is highly accessible due to its low transaction fees and the fact that it is available on many popular exchanges.

Dogecoin has a strong community of supporters, who often use its mascot — a shiba inu dog — as an emblem. Its low price makes it appealing to people with limited resources, while its ease of use makes it attractive to more experienced investors.

How Does Dogecoin Work?

Dogecoin is based on the same technology as Bitcoin, using a distributed peer-to-peer network to process transactions. All transactions are secured by a digital signature and stored in a public ledger called the blockchain. The Dogecoin blockchain records all transactions that have ever taken place, allowing users to verify the validity of each transaction with ease.

Dogecoin transactions are processed quickly, taking only minutes to complete. All users need, in order to send and receive Dogecoins, is a Dogecoin wallet which can be accessed on computers, smartphones, or even tablets. The wallet stores all the user’s addresses and private keys needed for sending and receiving coins. By using a wallet, a user can receive Dogecoins from other users or send Dogecoins to other users.

Dogecoin employs a proof-of-work consensus process, which requires mining to verify transactions. Miners are rewarded with more Dogecoin as a result of their labor. Dogecoin miners are responsible for verifying and confirming transactions, making sure that all transactions are valid before they are added to the blockchain. Miners work to solve complex mathematical puzzles in order to generate new blocks on the blockchain.

How Is The DOGE Coin Secured?

Dogecoin is secured with a proof-of-work consensus mechanism. It uses the same algorithm as Litecoin, which is known as Scrypt, and it allows miners to use their computers to solve complex mathematical puzzles in order to add new blocks to the Dogecoin blockchain. As more Dogecoins are mined, the difficulty of the puzzles increases, making it more difficult for miners to find new blocks. This helps to keep the network secure and prevents any one miner from dominating the network.

Dogecoin is also secured with strong cryptography, which ensures that all transactions are valid and secure. Additionally, Dogecoin has an active community of developers who work hard to maintain and improve the network through bug fixes, updates and other improvements.

Finally, Dogecoin has a vibrant community of users who are always on the lookout for scams and fraudulent activity, which helps to further secure the network. The combination of these factors makes Dogecoin one of the most secure digital currencies available today.

The History Of Dogecoin

Dogecoin was created in 2013, as a joke cryptocurrency based on the popular “doge” meme. It was the brainchild of Billy Markus and Jackson Palmer, two software engineers from Portland, Oregon.

Dogecoin quickly surged in popularity, and its market capitalization grew from just $135 million to a high of over $2 billion, as of May 2021. The currency was used for both day-to-day spending and charitable giving, such as donating to the Jamaican Bobsled Team or funding clean water projects in Kenya. Dogecoin is also being considered as a tipping currency on Reddit and Twitter, where users can reward others for posting interesting content.

Today, Dogecoin is still a popular cryptocurrency, although its market cap currently stands at just under $20 billion. The community of supporters remains strong. While Dogecoin may not be as valuable as some other cryptocurrencies, it has become an important part of the crypto ecosystem and is here to stay.

Is Dogecoin (DOGE) A Good Investment?

Dogecoin (DOGE) is a cryptocurrency that began as a joke but has become one of the most popular cryptocurrencies on the market due to its strong community support and increasing adoption by merchants. It also has relatively low transaction fees compared to other cryptocurrencies, making it attractive to those looking to spend their crypto without breaking the bank. Additionally, Dogecoin is highly accessible thanks to its wide range of wallets that allow users to securely store their crypto.

Despite these advantages, Dogecoin is still considered a high-risk investment due to its lack of widespread use and acceptance. It also has no long-term roadmap or development team, which makes it difficult to predict how the coin will perform in the future. As such, investors should think carefully before deciding to invest in Dogecoin. While it may have potential as an investment, it’s important to be aware of the risks involved and weigh them against the potential rewards. Lastly, anyone considering investing in Dogecoin should always do their own research before making any decisions.

To stay up to date with the current DOGE price data, click here.

Should You Buy Dogecoin (DOGE)?

The answer to whether or not you should buy Dogecoin (DOGE) is ultimately up to you. It’s important to do your own research and make sure that you understand the risks associated with crypto investing before putting your money in any cryptocurrency. Dogecoin has grown in popularity over the past few years, but it can still be highly volatile. It is not suitable for everyone and buying Dogecoin should only be done with money that you can afford to lose.

If you decide to invest in Dogecoin, it’s important to understand the technology behind it so that you can make informed decisions about your investments. The blockchain technology underlying Dogecoin is very secure, but it is not immune to hackers and scams. If you are considering investing in Dogecoin, make sure that you understand how the technology works and the risks associated with trading cryptocurrency.

How Many Dogecoin (DOGE) Coins Are There in Circulation?

As of August 2022, more than 129,800,000,000 Dogecoin (DOGE) are in circulation. This number may still increase over time since the coin has no maximum supply cap – meaning that miners and creators can continue to produce new coins indefinitely. In addition to this, a large portion of the circulating DOGE is held in long-term savings by users, rather than actively traded. This is a testament to the confidence that many users have in Dogecoin’s future growth potential.

The current circulating supply of Dogecoin (DOGE) means it is currently the sixth largest cryptocurrency by market capitalization according to CoinMarketCap – behind only Bitcoin, Ethereum, Tether, Cardano and Binance Coin. Dogecoin (DOGE) is the oldest of these top six cryptocurrencies.

Where Can You Buy Dogecoin (DOGE)?

Dogecoin (DOGE) can be bought from many different exchanges, depending on the user’s preference. The most popular exchanges to buy DOGE include Binance, Kraken, Huobi Global and Coinmama. Each of these platforms offer different features and services that may suit each user differently. However, before investing in DOGE, users should ensure that the exchange platform has security protocols in place and is reputable.

Once a user has decided which exchange to buy from, they must create an account on the platform and determine how much DOGE they wish to purchase. Users can buy DOGE in either fiat currency (USD, EUR etc.) or with other cryptocurrencies such as Bitcoin (BTC). After the purchase, users can store their DOGE tokens in a secure wallet.

In addition to exchanges, Dogecoin (DOGE) is also available on multiple peer-to-peer platforms including LocalBitcoins and Paxful. These platforms allow users to buy and sell DOGE directly with one another and typically offer more payment methods than traditional exchanges.

Dogecoin was initially just a joke, but it quickly rose to become one of the most successful cryptocurrencies on the market. Dogecoin earned about 5000% returns in 2021 and was embraced by celebrities such as Elon Musk and Snoop Dogg, boosting its price to new highs. Dogecoin is noted for its well-known and instantly recognisable DOGE-y logo of a Shiba Inu.

Dogecoin is a digital currency that was designed to be entertaining as well as user-friendly. It enables fast payments and transactions that are more cost-effective. Dogecoin, which was formerly thought of as nothing more than a joke but is now taken very seriously, has amassed an impressively robust and consistently expanding community of users, promoters, and endorsers who all praise DOGE for its basic and uncomplicated functionality.